Do you know these critical speeds for your airplane?

You do? Pretty good. Did you know that they change depending upon your airplane's weight? Go to the head of the class. In fact, each of these speeds is not one speed, but many, depending upon the weight of your plane. And Vx, Vy and Vbg even change depending upon your altitude. For the Piper Supercub that I tested, Vbg at max gross is 70 knots, but at minimum weight it's only 45 knots. The difference in the glide angle if you pick the wrong speed for the weight you are at is substantial. For example, the correct speed when light, 45 knots, yields a 13:1 glide ratio. If you were to incorrectly apply the max gross Vbg of 70 knots, you would get a truly rotten 9:1 glide ratio. For every mile you drop, you would cover 4 miles less over the ground. That could be the difference between making a good landing spot and not when the engine goes out.

What are you going to do, memorize a lot of different speeds for different weights and altitudes? Fortunately, there is a better way. The one thing these flight conditions (Vx, Vy, Vbe) have in common is that they all occur at specific Angles of Attack. For example, for that Piper Supercub, Vbg is 2.8 degrees AoA. It doesn't matter whether you're on a high mountain strip in the summer, or at sea level in the winter; whether at max gross, or just you and an hour's worth of gas. Vbg is always 2.8 degrees AoA. So, if you had a gauge that measured AoA, you could confidently put that gauge on 2.8 degrees and know you were getting the best glide ratio possible for the current conditions, whatever they were. 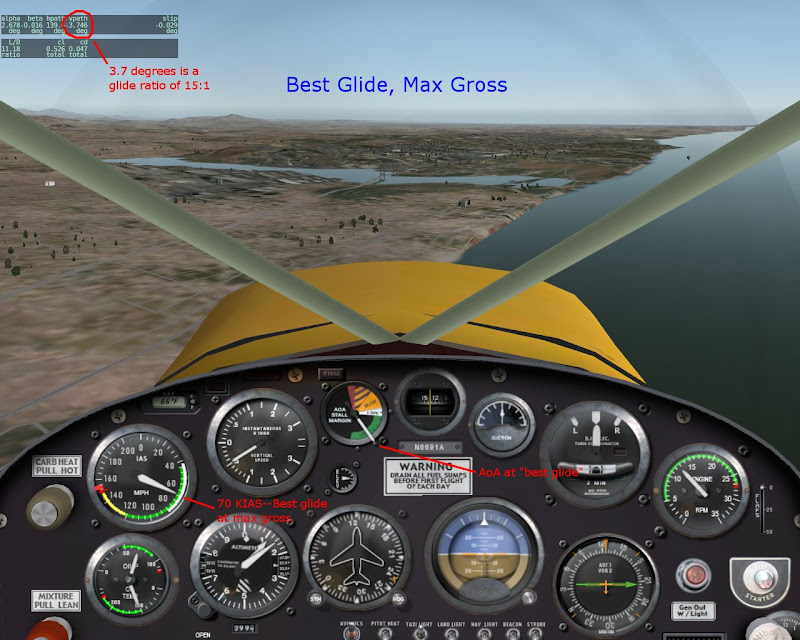 Here's the SuperCub at max gross. You can see the AoA gauge in the top-middle of the panel. The AoA gauge is calibrated so stall (15 degrees AoA) is at the top; as AoA decreases from there, the gauge moves clockwise. Why does the gauge "increase" as AoA decreases? Because it makes the needle respond to airspeed changes in the same way that the airspeed indicator does, which makes makes the gauge very intuitive to fly. To move the AoA needle clockwise, push forward on the stick; to move it counter-clockwise, pull backwards.

I've placed rivets on the panel to mark the important Angles of Attack. The rivet at 3 o-clock is best angle of climb; the rivet that the needle is pointing to in the picture is best glide/best endurance, and the rivet at about 6 o-clock is best rate of climb. I'm using one of x-plane's stock gauges; with some repainting of the gauge, I could have put custom marks on it for my airplane rather than put rivets on the panel. 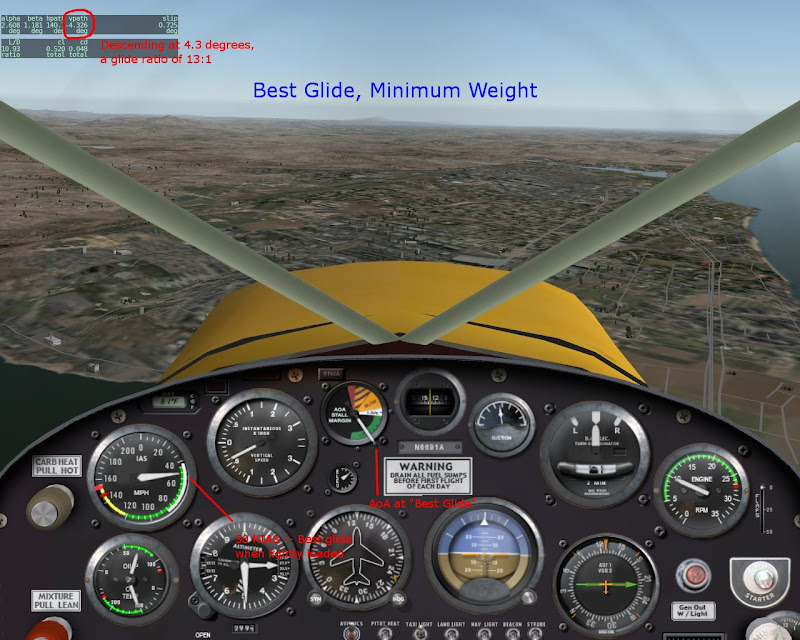 Here's the Supercub gliding again, but this time without all of that gas and no moose in the back. It's at the same Angle of Attack, 2.8, but this time going much slower. It's also got a worse glide ratio than the heavy plane. It's true: The more weight you put on the plane, the better it glides (but the faster it has to go to do it). 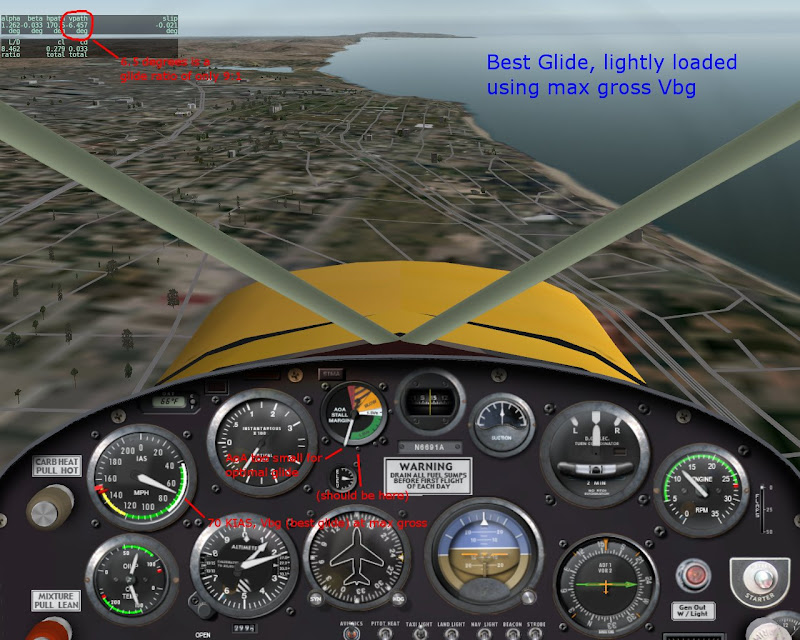 Finally, this is what happens if you pick the wrong speed for the conditions. Suppose all you did was memorize the Vbg for max gross (70 knots), but today you are lightly loaded. You will end up like this plane, with a glide ratio of 9:1 when you ought to have 13:1. If this pilot had used the AoA gauge and maintained an alpha of 2.8 instead of a memorized, one-size-fits-all airspeed, he'd be covering 44% more ground. 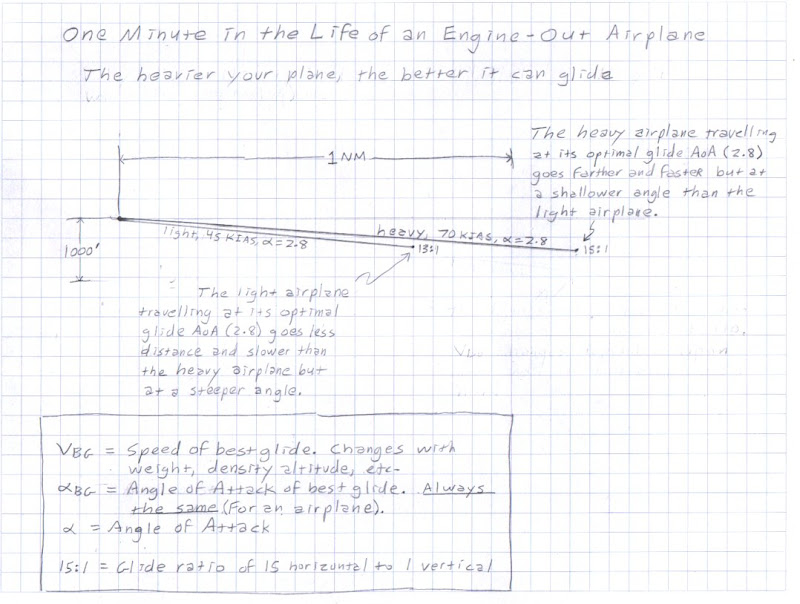 Next: Determining your plane's AoA numbers

Fantastic post! When you mention these speeds, I assume it's KIAS. Are you saying that the best glide speed (indicated) changes with air density?
KS Flight Log - VATSIM thoughts
Blogging: never before have so many people, with so little to say, said so much to so few. -- despair.com

Fantastic post! When you mention these speeds, I assume it's KIAS. Are you saying that the best glide speed (indicated) changes with air density?

Yes, KIAS. Vx changes with density, and because of that I incorrectly assumed that the other alpha related V speeds would, too. On reflection, it seems obvious that Vy, Vbg and Vbe should not changed with density. I'll go fix the article. Good catch, thanks.

In theory at the absolute ceiling of an aircraft Vx=Vbg=Vy which is the only speed where you can maintain level flight.

So a quick and dirty way to figure out your V speed with altitude is a know the abs ceiling of your aircraft the V speed at sealevel and the Vbg speed.

Peter, you're right about Vy changing with altitude. I found it with a closer reading of the reference I posted:


Let’s discuss how VY depends on altitude. There are a couple of issues:

* Obviously there is no point in asking about VY(100) at an altitude where the engine is not capable of producing anywhere near 100% of its rated power. Instead we might ask about VY(ft), where “ft” stands for full throttle. For a non-turbocharged airplane, VY(ft) will decline somewhat as altitude increases, for reasons discussed in connection with figure 7.10.

* Propeller efficiency depends on TAS (not just CAS). The TAS/CAS ratio is a fairly strong function of altitude. Imagine having a fixed-pitch prop with a very fine pitch. As the altitude increases, the TAS might increase to the point where it overruns the pitch of the prop at any reasonable engine RPM. You would have to fly at a slower CAS to get any thrust at all. In this scenario, the power curve would be grossly distorted, and VY would be a declining function of altitude. Conversely, a propulsion system optimized for high-speed cruise might work better at high altitude. (For example, a turbojet – with no propeller at all – works better and better as the TAS/CAS ratio increases.)

Bottom line: In a non-turbocharged fixed-pitch light aircraft, you can expect VY(ft) to decline slightly as altitude increases. Usually you don’t need to worry about it, unless you have a special reason for flying close to the edge of the envelope (e.g. mountain flying) – in which case you might hope that the POH documents how VY(ft) depends on altitude, weight, et cetera. (Some do, but most don’t.) And POH or no POH, you should do some experiments to verify the critical performance numbers for yourself.

Of Vx, Vy and Vbg, the only one I now lack a hard reference for is Vbg. Since it does not depend upon engine power, it stands the best chance of being invariant with density.

I found a reference here.

Vbg also varies with density. Not that I ever doubted Peter. Trust but verify, ya know?

Vbg varying with density is news to me. Especially as page 211 of that same reference says that it doesn't. I think your reference is referring to Vbg varying with weight, even though it says weight and altitude.
Peter Grey
Instructor - ZLA
N31ER
"Nice Landing, Contact ground point 5"

Peter, p. 211 is concerned with Yx, angle of steepest climb. At the bottom of p. 210, the reference concludes that Ybg does not change with altitude or weight, and that's true, since Ybg is the angle of best glide(the glide ratio). What I'm after is Vbg. The best I've found in that reference is on p. 312: "So, in a calm, weight and altitude have no effect upon the best glide angle. On the speed for best glide, yes, but not on the angle itself."

Heres the quote from page 210 near the top.


And a practical consequence of Eq. (7.61) is that none of these 4 V speeds - Vx, Vbg, Vmd, or Vs - considered in calibrated terms, varies one iota with density altitude.

What good to me is calibrated airspeed? I fly using indicated. And in terms of indicated airspeed, Vx, at least, increases as density decreases.

Users browsing this forum: No registered users and 4 guests